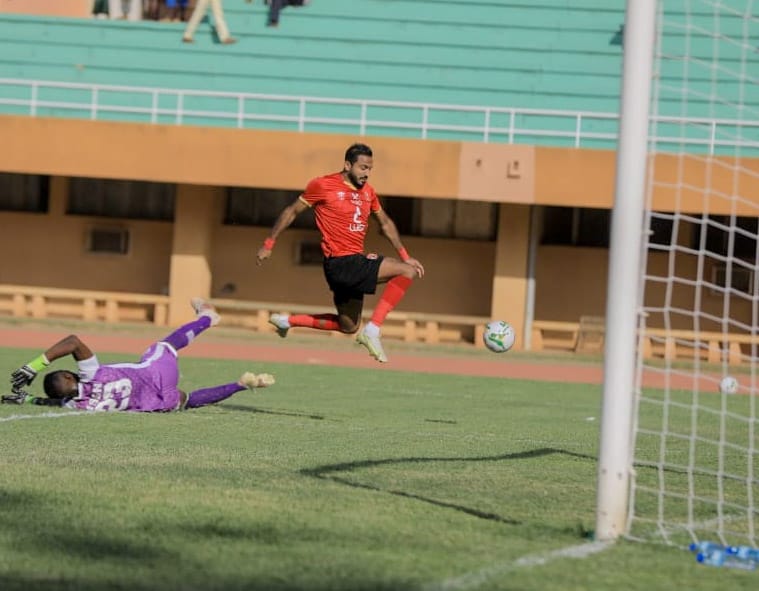 Al Ahly were held to a 1-1 draw against USGN of Niger in the first leg of the CAF Champions League round of 32.

Ali Maaloul broke the deadlock in the 19th minute from the spot, but USGN’s Moumouni Diori managed to level the score in the 76th minute.

The game started with frontline pressure from our players as we were trying to score the early opener.

We almost took the lead in the 8th minute but Mahmoud Kahraba’s effort went out to a goal kick.

After missing several scoring chances, we were awarded a penalty in the 19th minute due to a late challenge from USGN's goalkeeper against Mohamed Sherif inside the penalty area.

Maaloul stood behind the ball and converted it into the back of the net to give us a 1-0 lead.

The Red Eagles then kept their pressure, and once again we went close to double the score in the 25th minute when Sherif fired a shot from the edge of the box, but the ball went to the keeper’s hands.

USGN upped their pressure in the second half as they were seeking to equalize the score, but our defenders managed to keep their attempts away from the net.

In the 56th minute, Sherif sent a brilliant pass to Taher Mohamed Taher, who went one-on-one with the keeper. However, Taher failed to double the score as the keeper blocked his chip.

USGN kept pushing forward to equalize, and they were close to level the score in the 65th minute, as their player’s shot hit the crossbar.

Pitso Mosimane decided to use his bench in the 67th minute, as Walid Soliman joined the game instead of Mahmoud Kahraba.

Two minutes later, Ali Lotfy was needed once again as he denied a clear scoring chance for USGN’s player in a one-on-one situation.

USGN kept their pressure to equalize and in the 76th minute, Moumouni Diori converted the ball into the back of the net to make the result 1-1.

Mosimane made another two substitutions in the game, as Akram Tawfik and Badr Benoun joined the game instead of Taher and Aliou Dieng.

With 15 minutes left on the clock, the Red Eagles pushed forward to score the winner.

In the 86th minute, Tawfik was awarded a free-kick at the edge of the penalty box due to a late challenge from USGN’s defender. However, Soliman’s shot missed the net and the ball went to a goal kick.

The minutes went on and then the referee blew his final whistle to declare a 1-1 draw at Stade Général Seyni Kountché in Niamey.

On 23 October against Niger’s USGN in the second leg of the CAF Champions League round of 32.